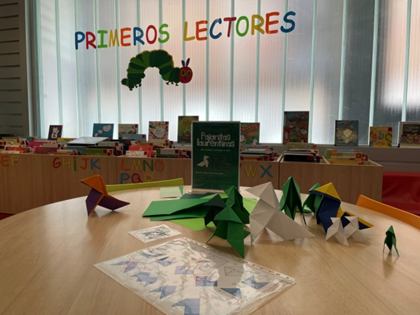 In August 2020, in the middle of the pandemic crisis, the municipal libraries of Huesca launched a challenge to the citizens of Huesca, to fill the different library facilities with laurentine bow ties. Many people collaborated and during the whole month it was possible to exhibit them. We also had the collaboration of Julio Luzán who donated polystyrene bow ties for the decoration.

These bow ties flew to public libraries in Piekary (Poland) and Panevezys (Lithuania), twinned with the libraries of Huesca through the NAPLE Sister libraries programme coordinated by the Ministry of Culture. In August 2022, we wanted to relaunch the challenge again to the citizenship, providing material in the libraries themselves for the realization of the biblitoecas and also collecting the ones made at home.

This year the laurentine bow ties will travel to Ukraine, specifically to the Shevchenko children’s library located in Kiev https://shevkyivlib.org.ua/, whose director Valentina Dryakhlova, has expressed her gratitude for the proposal in such difficult times for the country and especially that other countries think about supporting proposals like this aimed at children in Kiev.

The bow ties will be sent on 22 August together with material provided by the Huesca tourist office, specifically pencils containing a capsule with basil seeds for the children in Kiev to plant. An explanation of what Ramón Acín’s bow ties represent for the city of Huesca will also be sent.