Migrate to Library! A cooperation project funded by the European Comission 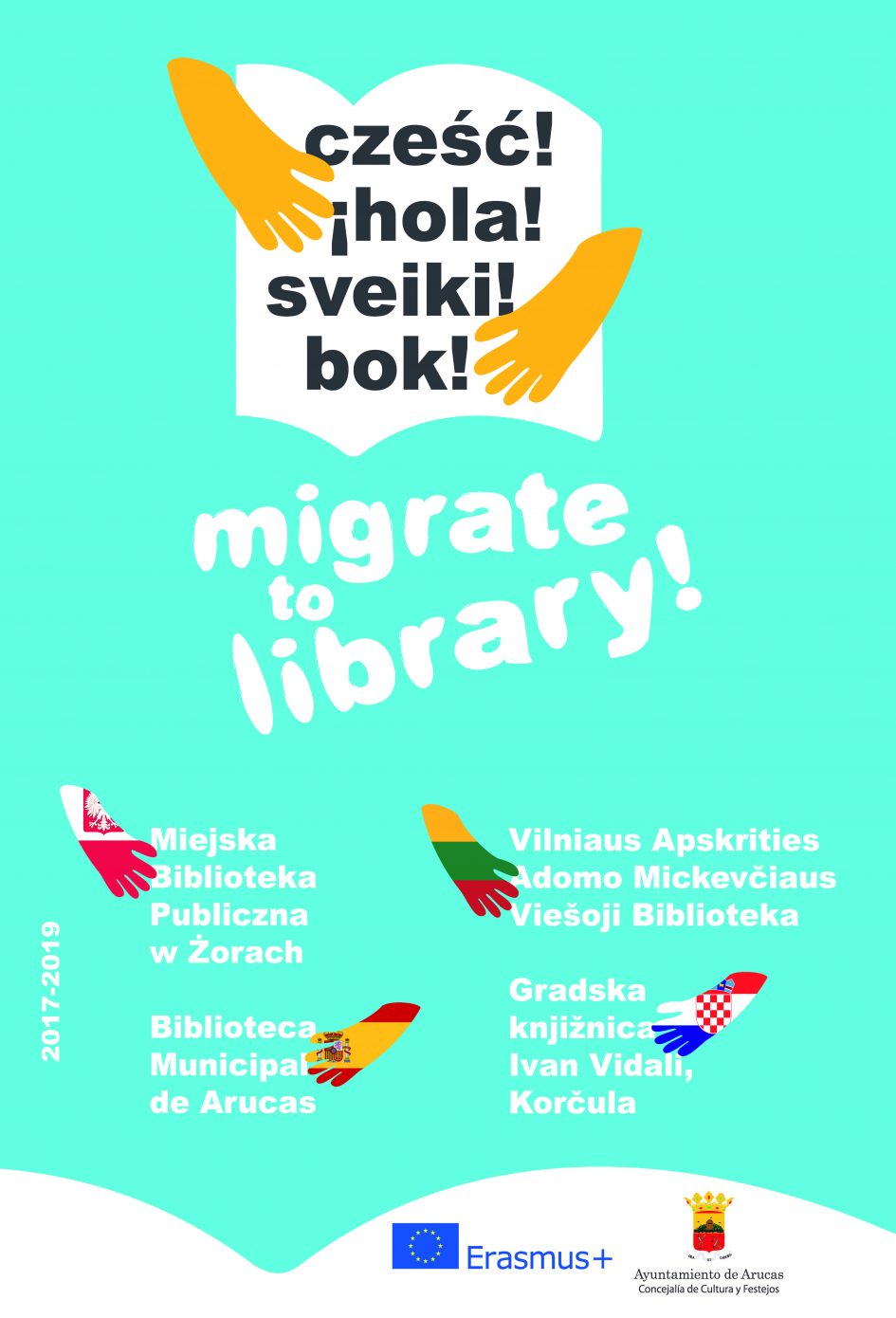 Arucas Municipal Library was the first library in Canary Islands (Spain) to join a European project:

Under the the Grundtvig program of the European Commission, it received a grant of 17.000 euros. In the project, libraries from 8 different countries participated: Austria, Croatia, Spain, Finland, Italy, Czechia, Poland and Turkey.

The project was awarded with the “Quality Recognition 2015” by the Spanish Service for the Internationalization of Education (SEPIE) of the Spanish Ministry of Education, Culture and Sports.

Sister Library Arucas Municipal Library is the only Spanish library participating in Erasmus+ projects, and now she participates in this one: 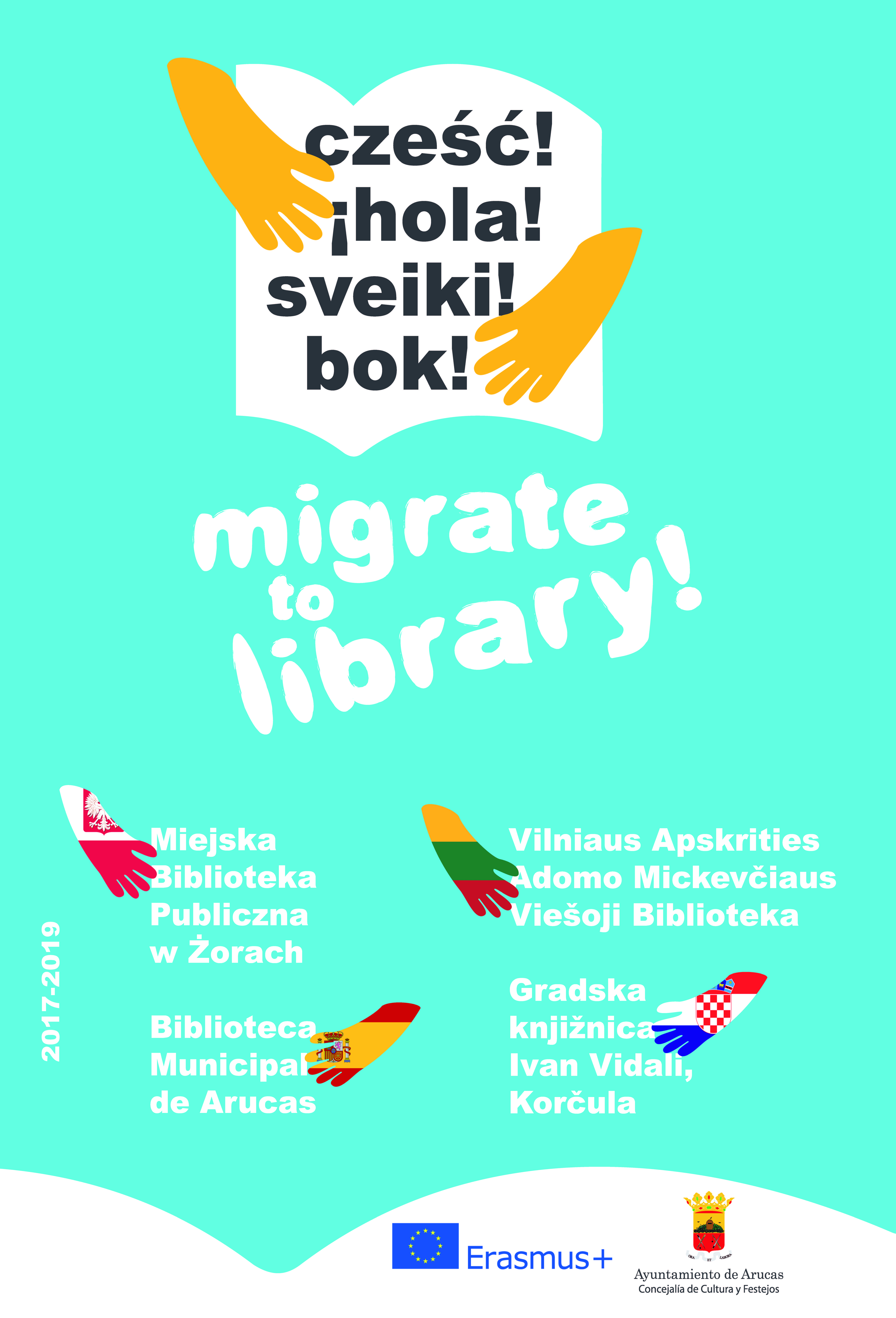 Description of the Project

One of the challenges of today’s world is the migration crisis in Europe. Amongst the multitudes of people arriving to our continent, there’s people that do it for economic reasons and there’s also refugees.

Libraries can play a very important role to play in this crisis. As institutions that, for many years, have been working in European countries, are naturally interweaved in the local community. They are seen by the society as cultural and educational centres. The staff at the library is commonly linked to the local community and it’s easy to reach them with new proposals.

The project Migrate to Library! seeks to highlight that libraries are institutions that raise confidence amongst the citizens. That they can be seen as active centres of culture and education for all, no matter what age, religion, nationality, disability or social condition.

All the activities in the project are associated with learning to widen knowledge, master skills and competences and develop both professional and personally. This concerns the participants in the project, but also the local communities where libraries develop their work.

The international meetings will contribute the mutual inspiration in relation to the lifelong learning. They’ll allow to collectively reflect, compare and evaluate our achievements in the field of migration.

The project is granted with 73.975 euros, 20.840 of which are for Arucas Municipal Library

The results of our work will be visible throughout the 3 years and also at the end of this period. For example, a Graphic Identity Manual has already been designed, This is a contribution from Arucas Municipal Library that the countries involved will use for any communication or promotion activity within the project.

There’s also a plan to elaborate:

In the project timeline there are scheduled 4 international meetings, one in each of the countries participating, aimed to interchange good practice in the migration field.

Professional training courses for the staff of the libraries

They’ll be held with the financial support of organizations working on the investigation of peace from Varsovia and Zagreb:

Poland will organize, in February 2018, a course called Stand on multiculturalism (part I), that’ll introduce the complex multicultural issues and will explain the contemporary migration waves and their roots.

Croatia will organize, in April 2018, a course called Stand on multiculturalism (part II), that’ll show the usage of technical skills in the practice of working with migrants.

We invite you to visit the fanpage of the project Migrate to Library! in Facebook (@migratetolibrary), where we will publish news and the actions taken by the libraries participating in this initiative.