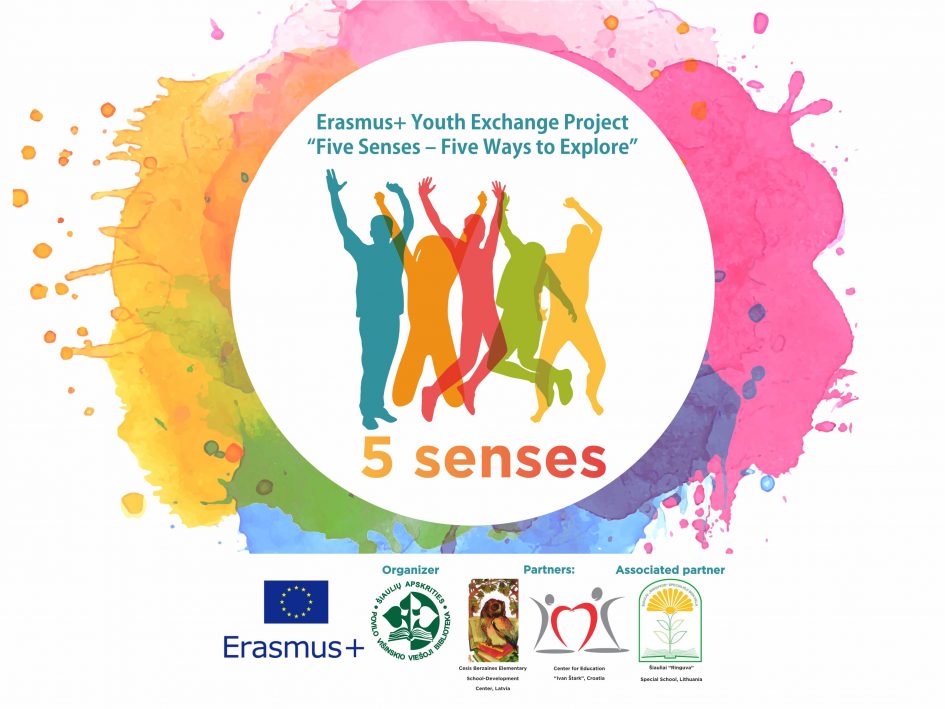 In September, 2019, Šiauliai county Povilas Višinskis public library (hereinafter – SCPL) under the European Union program Erasmus+ carried out the project “Five Senses – Five Ways to Explore”. The project was aimed at young people with special educational needs and disadvantaged aged 13-18 living and studying in special education and care institutions in Lithuania, Latvia and Croatia. Their connection with society and the outside world, communication, and cultural awareness are limited by their disabilities. Such a project is the library’s first experience in organizing youth exchanges. The project’s activities provided a unique opportunity for young people with special needs to travel and explore another country, get new experiences, learn simple things in an unusual environment, meet and interact with their peers with similar disabilities, and for professionals – to establish long-term relationships with their counterparts, to share good practices.

In the last few years, SCPL has significantly expanded its services to people with disabilities in order to promote social integration, develop their creativeness, artistic and intellectual abilities as well as to raise public tolerance. Special attention has been paid to increase the inclusion and socialization of people with mental disabilities and their families. In 2018, the library became the first autism friendly library in Lithuania. SCPL established a specially adapted room while library staff raised their qualification in order to prepare a number of educational activities and implement projects. Librarians are constantly looking for new ways and forms to engage people with disabilities in cultural activities, raise public awareness and tolerance.

Partners of the Project

At the beginning of 2019, an international Erasmus+ contact making event “All Included” took place in Poland to promote partnerships among countries in the development of projects for young people with disabilities. During this event, the main idea of this project was born so a tripartite partnership among SCPL (Lithuania), “Ivan Štark” (Croatia) and Cesis boarding school-rehabilitation centre (Latvia) was established in order to write the project “Five Senses – Five Ways to Explore”.

Cesis boarding school-rehabilitation centre in Latvia is for children with learning disabilities, language and behavioral problems, intellectual development and Autism Spectrum Disorder. Founded in Osijek, one of the largest Croatian cities, Ivan Štark is the largest Croatian public primary school in the region for children with intellectual disabilities and others who cannot attend a traditional school. For several years, SCPL has been cooperating with its partner from Lithuania, Šiauliai “Ringuva” special school. The school provides educational assistance for children with special educational needs, develops their spiritual, intellectual and physical abilities, and helps to overcome social exclusion. The pupils from “Ringuva” special school often participate in SCPL educational and cultural events while teachers collaborate in various project activities and consult the library in creating educational programs for the disabled.

After returning from Poland, the SCPL team already had an idea and new partners, so they started developing a program of activities for the future project. This was not easy as the project involved young people with different disabilities, each with their own needs, way of communication and level of response to environmental stimuli, not to mention the barriers of different languages. The uniqueness of the new project and the need to implement this idea was later revealed as the project was won with almost the perfect amount of points – 96 points out of 100 possible.

A total of 18 young people, 6 from each country, participated in the project activities together with their teachers. A large part of the activities took place at Šiauliai county Povilas Višinskis public library, which for six days became like a second home for young people.

The participants of the project had to do “homework” – to prepare short presentations of their traditions, school, country, etc. Everybody was amazed by creative and very unique presentations which were produced and self-presented by young people themselves. Communication was purposefully enhanced by playing teambuilding games in the fresh air, information was shared during an intercultural afternoon, and reflection evenings helped children to express their experiences. One of the days were dedicated for montages of captured moments during the project thus participants were able to see themselves among new friends, re-experience the most exciting moments.

The guests were curious about the profession of a librarian, library’s activities and services for visitors, clubs and, of course, they actively participated in educational activities offered by SCPL themselves. Ex libris workshop at the SCPL Book Graphic Center revealed the artistic abilities of young people, encouraged their creativity and showed skills in using paint and art tools.

Children also tried the popular “Sensory Readings” of SCPL where they were able to engage in the reading process while performing various additional tasks and games. Another popular activity for children was the Laboratory of Innovative Technologies which promotes creativity by drawing with 3D pencils, building lego robots, moving inside the virtual world using virtual reality glasses. Participants watched a film adapted for children with special needs at the library’s cinema that emphasized the importance of sincerity, friendliness and mutual understanding. All activities were focused on five senses – vision, hearing, smell, touch and taste. A warm, informal communication helped youngsters to open up to each other and not feel constrained. The fun atmosphere was maintained by mimes and librarians dressed up with costumes.

During six days of the project activities, the SCPL team had to work hard, but the results were well worth the effort. The Erasmus+ youth exchange and the SCPL project “Five Senses – Five Ways to Explore” have become a successful first step towards similar future projects that reduce discrimination, social, cultural and intercultural exclusion of young people with special needs, and raise awareness and integration opportunities. The international mobility of young people with special needs is low, they do not have many opportunities to travel, get acquainted with the culture of other countries and meet foreigners. Traveling like this is a great opportunity for them to learn things that matter – interacting with other people, getting used to an unusual environment, following commonly accepted rules of behavior, developing their mental, emotional and physical powers, self-confidence, making new friends.